When Apple announced the new iPad last week, Phil Schiller made a point of highlighting it as a replacement for the 600 million PCs that are over 5 years old.

While I like that Apple is pushing the iPad a PC replacement – for many people it is (including myself, mostly); I do think that people still using a 5 year old PC are likely to be in the ‘technologically conservative’ camp and will therefore run up against limitations if they tried to use an iPad as a replacement.

Not to mention that the cheapest iPad Pro with a keyboard cover is an extraordinary £628.00!

Yes, it has many, many benefits over a PC – low maintenance (the only real maintenance iOS devices require are OS updates and managing the puny amounts of storage they have) – and best of all there’s no antivirus software or other crapware preloaded.

So nice a nice idea, but in reality anyone who hasn’t updated their PC in 5 years probably isn’t going to blow £628.00 on a device that isn’t a dead cert to cover all scenarios. Also I’d expect a £628.00 laptop to have more than 32G of storage.

So it seems iPad sales have fallen for yet another quarter. As someone whose iPad is their favourite computer; on the one hand this surprises me – why wouldn’t everyone and anyone want one of these fabulously useful and fun gadgets? But on the other hand I can absolutely see why many people wouldn’t have a space for this relatively expensive, yet limited device in their lives.
The problem is that a tablet does some things really well: browsing the web, watching videos, taking notes, editing photos. It also does some things very poorly: you can’t import music purchased from someone other than Apple into your music library (iTunes Match) for example and the apps are in general baby versions of their desktop counterparts. Need to rotate, annotate and save a PDF? Create a PivotChart? Have two Word documents open at the same time? You’re out of luck.

The iPad’s big differentiator is that unlike an iPhone, it can actually be used to create content (By content I don’t mean social network updates!). Witness the suite of applications Apple provide for free or next to nothing; GarageBand, iMovie, Pages, Keynote and excellent apps like Pixelmator, which is the only image editing application I’ve ever been able to comprehend (I even managed to ‘photoshop’ someone who was in from one photo and place them into another, while making it look convincing). The problem is, most people don’t create content very often. Outside of work and school (where people obviously do), most people’s computing needs boil down to what is the quickest and most comfortable way to consume content. The iPhone’s success in business was dominated by it’s consumer success (the so called ‘consumerisation of IT’) but the iPad hasn’t followed this because for most people, the phone is simply ‘good enough’ to check Facebook, lookup that recipe or watch Netflix.

The phone is the best compromise, for now

Most people have learnt this over the last four years of iPad usage. The iPad isn’t better than a phone at the ‘phone’ things people do (Facebook, messaging, email) and it’s not better than a laptop at the ‘create’ things people do (with all the edge cases these entail). If you’re going to put down £400 or more on a new computer, why would you buy an iPad when you know it’s not going to replace your aging laptop and you’ll still need to replace that thing when it dies too. So most people buy new laptop instead, and that would seem like a smart decision to me.

Phone sales remain strong and this is because the phone is currently the best compromise for mobile computing. A small screen with lots of sensors and are useful while you’re out and about – camera, GPS, compasses etc. The iPad is a more enjoyable and productive device to use than a phone because of it’s larger screen size, but that also means it can’t replace a phone because nobody wants to carry a large bag on them at all times. It’s not an ‘always with you’ device. The phone is therefore the best compromise between having a nice big screen, and having something that is always on your person. Will this always be the case however? Once smartwatches are able to connect directly to cellular networks and don’t need to be tethered to a phone, will they be able to take on the role of ‘always with you’, for messaging, directions, checking headlines etc? If this happens then what do we need the phone for? It’s no longer necessary to have this compromise of a smaller screen. In this case, would people decide that a watch and an tablet (or laptop, if the iPad or its competitors haven’t improved its software yet) will take on the roll of web browsing, Netflix and Facebook, fulfilling the rest of their computing needs? I could quite see myself using just a watch and a tablet, if both devices progress in the right directions over the next few years. 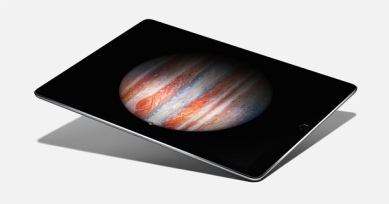 The iPad Pro is now available, with its much larger screen. Admittedly I haven't had a chance to try one yet, and having only purchased a new iPad last year, I probably wouldn't consider such a purchase so soon anyway. But as someone who does try and do real work on an iPad, (I enjoy stepping away from my desk from time to time to focus in on something, and the iPad is perfect for this.), I am not frustrated by the iPad's lack of screen real estate (though I've no doubt more is better, it usually is) but by its limited software.

This 'limited software' is not always the fault of Apple, developers purposely try and simplify their iPad releases in an effort to route out the bloat that dogs their desktop equivalents. This is mostly a good thing, as someone who runs complex software projects for a living, I am always a proponent of the KISS philosophy (Keep It Simple, Stupid). However, there haven been numerous times when I've had to walk back to my desk and grab my laptop because something just isn't possible on an iPad.

Take Microsoft Excel. The desktop version may be a horrible, bloated and full of legacy code (it seems to have its own rules on when to wipe your clipboard unexpectedly), but to its credit, it does make a lot of complex, routine tasks very quick and easy. If I have a list of stuff and I want to remove duplicates, it's one click. If I have a CSV file (or values separated by another delimiter), converting this to columns is only 2 or 3 clicks. None of this functionality exists in the iPad version. Microsoft OneNote on the iPad doesn't have Outlook integration (the ability to pull in meeting details), and while Microsoft have recently added support for audio recording to OneNote, it's modal – meaning I can't take notes while I am recording – which is one of my favourite features of the desktop version, because it synchronises your note with the timestamp of the audio recording, meaning you can quickly seek to important parts of a meeting when you're trying to remember what was going on. Again, back to my laptop.

I don't want to pick on Microsoft, they make some of the highest quality iPad software out there, and I know all too well that quality, time to market and the number of features are all opposing interests, and Microsoft has made the decision to go for quality over features. There's nothing wrong with that, in fact it's the best decision they could have made in my view, but it doesn't change the fact that the iPad just can't do these seemingly simple things a laptop can. Adobe and Apple both have examples too. I was sent a wireframe that had been hand-drawn and had been scanned and emailed directly from a networked printer/scanner. I wanted to annotate the resulting PDF. On the Mac I would use Preview, on Windows I'd use Adobe's Reader application. Preview on iOS doesn't support annotation, so I used the Adobe Reader app for iOS. It did support annotation, but due to the way the image had been scanned in, it was upside down. Surprisingly, there was no way to rotate the PDF. Back to my laptop, again. Yes with a little help from Google, I'm sure I could find an app that lets me rotate a PDF, but will it also support all the other things the Adobe app does? The bottom line is, it's not feasible to go on an app hunt every time one of the simplified versions of an app comes up short. When Steve Jobs introduced the iPhone in 2007 he made a big deal out of the fact other smartphones only showed you the 'baby web' and the iPhone didn't – we have the same situation on iOS now, we get baby applications.

Then there is the inability to have more than one document open at once. I can now have Twitter and Pages open at the same time, but not two Pages documents. Even just a way to quickly switch between documents would be nice. At the moment I have to close the first document, find the other one (navigate a long list of files and folders), load it (and wait while it loads), and then repeat the process when I want to return to the original document. Writing one document when referring to another is not an uncommon computing task, and yes there are workarounds like exporting one of them as a PDF and opening it in a separate application, but this isn't very clean, and what if I want to edit both documents?

I don't want to take way from the iPad what is is great at; web browsing, writing this blog post, simple spreadsheets, reading books, playing games, managing email, task lists – the list goes on. While I'm sure the iPad Pro is a beautiful device, and if money was no object Id buy one today, I don't think having a bigger screen is going to turn it into a laptop replacement. I would love to be able to work solely on an iPad, but until the software improves, I can't see this happening, no matter how big the screen is.