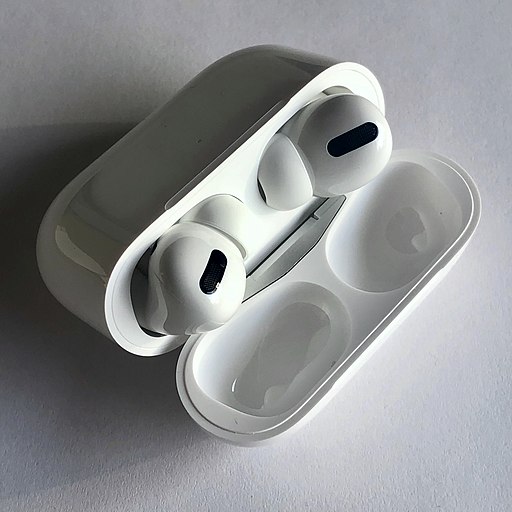 I’ve had the AirPods Pro for just over two months now, so I’m posting my thoughts in the hope that someone might find it useful to get a ‘normal’ person’s review. By ‘normal’, I mean someone isn’t a technology reviewer by profession, and so doesn’t receive the latest gadgets on a weekly basis, and as someone who had to shell out their own hard earned money for the privilege! (On a tangent, there are some great YouTube channels out there reviewing gadgets, but as soon as the creator goes ‘pro’ and suddenly has a £2,000 laptop or £1,200 phone every week, they loose part of what made them interesting, in my humblest of opinions).

I’ve been using AirPods since 2017 – boy does time fly, it seems like yesterday. I was immediately a fan. The main selling point for me was the fact there was no ‘on/off’ button, and you didn’t need to worry about leaving them switched on. I was forever leaving my other bluetooth headphones powered on and in my bag, and then getting frustrated when Siri didn’t work because it was listening to me through the headset and not my phone’s microphone. AirPods solved this brilliantly. The fact they were such an elegant package, and worked so seamlessly with the Apple Watch was also really cool. I swear running without my brick of an iPhone 8 Plus helps me get a better time.  I still use my 2017 ‘original generation’ AirPods regularly, although the battery life is now a little under 2 hours when listening to music, or about 45 minutes if making a call. I can’t help but think the relatively quick degradation of AirPods’ battery compared to say my Plantronics BackBeat FIT (which I’ve had since 2015 and still manage 5 hours) is due to the fact they are constantly charging in the case when not in use. Apple released a feature for the iPhone in iOS 13 that stops your phone from charging all night, in order to lengthen the battery longevity.  Using that same logic, being plugged in 90% of the time must take its toll on the AirPods’ battery.  Needless to say, the convenience, small size and sheer utility meant I was excited about upgrading the the AirPods Pro.

The biggest noticeable difference with the AirPods Pro is the shape and size. Gone is the long pole that hangs down form your ears. Objectively, the AirPods Pro probably look better than the classic style of AirPods, however the classic AirPods are so ubiquitous now that what once seemed ridiculous now comes across as quite fashionable. If anything, I can see the classic AirPods (which Apple continues to sell) being more popular with younger, more cash-strapped individuals, and consequently more fashionable.  Due to their price, AirPods Pro are more likely to be seen on middle-aged IT workers, which may limit their fashion appeal. Despite that, they fit exceptionally well thanks to the three sizes of ear-tips that come in the box, and a built in software utility that helps you to determine if you have a good fit for noise isolation. They are slightly more fiddly to put away than the originals – I find the ear tips often fold inside-out when I remove them from my ears which can be annoying. On the whole though, a better fit means better sounding music. The classic AirPods had terrible noise isolation, so much so that I couldn’t use them on the train in the summer when the windows were open. As a sufferer of tinnitus since I was 23, I am very conscious of not increasing the sound levels on headphones above the EU recommend limit. With AirPods Pro’s more secure fit, I rarely need the volume above 75%.

There’s a lot to be said for the line of thinking that goes: the more you pay for a pair of headphones, the better they sound. Just knowing you have a pair of premium, 24-bit, gold plated headphones can cause a placebo effect in of itself. The AirPods Pro however, do genuinely sound amazing. I’ve heard parts of songs I’d not noticed before: previously hidden rhythm guitar sections, or faint backing vocals.  This is on songs I’ve been listening to for 20+ years. The AirPods Pro sound great. The biggest new feature, Active Noice Cancelation (ANC) is extremely good too. I’ve only ever had one pair of noise cancelling headphones before, the Plantronics BackBeat Focus – my office daily driver for Skype Calls. I’d say the AirPods Pro’s ANC is much better, especially considering their small size. I don’t travel often, but I did a short flight recently and was able to listen my AirPods Pro at about 40% volume with ANC switched on  which was outstanding. When out and about, Transparency mode does an exceptional job at passing through the sounds of the world around – essentially for walking or running on country lanes against the traffic, as I do frequently.  It’s an odd sensation, it seems to slightly increase the higher range meaning you notice the birds singing more than usual. After a while it’s easy to forget you are wearing the AirPods as the outside world sounds so natural, except if it’s windy. I’ve found that running or walking in a breeze does lead to an uncomfortable sensation of of what sounds like someone blowing directly into your ears. I’m surprised there was no way with all the technology onboard this sound could be offset, but I imagine that’s not an easy problem to solve. I hope Apple can improve this with a software update. It’s not a deal breaker, but it’s also not something I’ve ever noticed with other headphones before.

With the classic AirPods, you could double tap either side to invoke Siri, or trigger play/pause – depending on your configuration. With the new AirPods, double tapping is gone. Instead you need to squeeze the tip. This is more flexible as you can now either press once, twice or three times for play pause, skip forward and skip backward respectively. Pressing and holding switches between ANC and Transparency mode. Overall it’s a better system however I’ve noticed that I often pull the AirPod slightly out of my ear when using this control mechanism, which means I inadvertently loose the seal needed for decent noice cancellation. Siri is as inconsistent as ever. Unlike my OG AirPods, there’s no need to double-tap, I can just shout ‘Hey Siri’. Sometime Siri works like magic – ask it to turn on transparency mode, or lower the volume and 70% of the time it responds instantaneously saying ‘Okay, done’. The rest of the time however, it either takes too long that you doubt yourself – did I say the right thing? – and end up getting your phone out of your pocket, or it gets the wrong idea completely. There is something infuriating about requesting your favourite song, and having your phone proudly inform you it’s going to play a totally different song, from a genre you can’t stand, at maximum volume.  Once thing I do notice is you need to say “Hey Siri’ pretty loud. Probably no louder than normal conversation, but louder than I’d like to when I’m in a public place. There’s something about asking your phone to remind you about buying toilet paper, or to send a text your significant other with a question asking them what they want for dinner that means I don’t want to scream it like Dom Joly.

A feature I have enjoyed is one hidden away under the notification settings for iMessage that allows messages to be announced and read by Siri when they arrive. This is genuinely cool, but I’m flummoxed as to why it’s only available on AirPods. Yes you can reply instantly without needed to say ‘Hey Siri’ which requires some clever work by Apple, but I’d be willing to forgo this if I could have this feature in my car too. It’s also of limited use because it doesn’t work with WhatsApp, which is the de facto SMS replacement in the UK.

I’m very impressed and would recommend them to anyone in the market for some premium headphones. Then again, for a staggering £250, I expect to be impressed. I understand there’s a lot of new technology in these, but I feel £199 would have been more reasonable for something with a 3-year lifespan. The main downside of the AirPods is their limited lifespan. For 2-3 year however, expect to enjoy great sounding music.

View all posts by Marc Wickens